Join Today
JinkoSolar poised to hit 10GW annual shipment target, but what next? 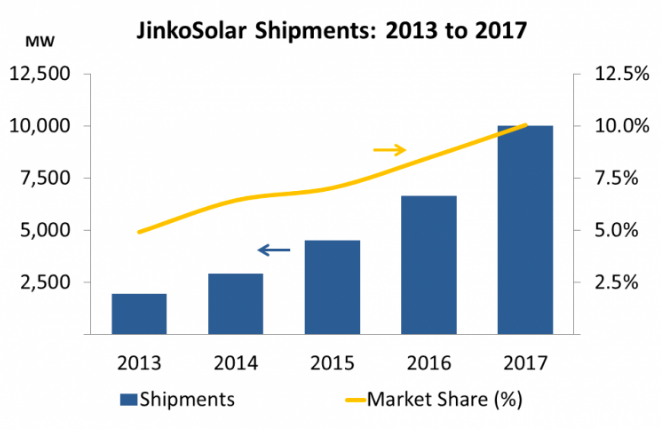 When JinkoSolar released its third quarter results last week – and guided full year 2017 module shipment figures – the company remained on track to overachieve on final quarter shipments, thereby becoming the first ever PV supplier to ship more than 10 GW of modules in a calendar year.

If this landmark figure is reached, JinkoSolar will effectively have 10% market-share, and it will have achieved one of the key goals set internally 12 months ago. This article tracks how JinkoSolar has managed to move so quickly in the past four years, from having 5% market-share in 2013 (with module shipments less than 2GW), to 2017 where 10% and 10GW has been the goal for its global sales team.

The question of ‘what next’ is also discussed, in view of JinkoSolar having relied heavily on third-party cell and module supply during the past four years to support its module shipment aspirations; and from an audited reporting perspective, being essentially a pure-play module revenue operations.

In February 2017, JinkoSolar gave its first guidance for 2017 shipments, at 8.5-9GW. However, it was generally understood that JinkoSolar had set an internal goal for its sales team closer to 11GW, providing the first indication that hitting 10GW was seen as the real target, and one that would yield significant marketing kudos during 2018 and beyond.

When first half shipments in 2017 exceeded 4.9GW, further signs emerged that 10GW would be achieved rather easily. Even during 2016 (with the China slowdown in Q3’16) second-half shipments exceeded first-half by more than 10%. Previous years for JinkoSolar have been significantly higher than 10% half-year growth.

When 9-month shipment figures were reported by JinkoSolar last week, the annual level of 2017 had exceeded 7.3GW, almost perfectly on track to reach the 10GW shipment goal. Guidance for 2017 was given at 9.6-9.8GW.

However, the final quarter has generally been the strongest quarter for JinkoSolar, with approximately 30-40% of annual shipments occurring in Q4 during the past few years. If 2017 follows this trend, then the 10GW annual figure will be met, and explained simply by final shipment figures coming in just above the high end of Q4’17 guidance.

Therefore, when JinkoSolar reports its final 2017 shipment figures (during February or March 2018), don’t be surprised at all if the company begins its press release with a simple and clear message, based firmly on being the first ever PV company to ship more than 10GW of solar modules in a single year.

Doubling market-share in a high-growth segment

Any company that doubles its market-share in four years – in any sector – will generally be accompanied by its chief executives shouting from the rooftops, happily receiving plaudits from the investor community in recognition of a strategy successfully enacted. However, to do this in a sector that has seen more than 25% compound annual growth during the same period, there has to be more than just a few stars fortuitously coming into alignment to help things go your way. And for good measures, let’s add in a bunch of unforeseen trade cases impacting place-of-manufacture and shipment-destination, and a 40% reduction in market pricing due to chronic oversupply.

This is indeed what has happened in the PV industry during the past four years, while JinkoSolar has moved its market-share from 5% to 10%, is likely to hit the 10GW module shipment figure this year, and will be miles ahead of any other module supplier as the leading and single most important module supplier to the PV industry going into 2018 and beyond.

Nothing like this has been seen before in the PV industry, when it comes to module shipments. So let’s have a look at what has enabled this, leading finally to the big question now – what next!