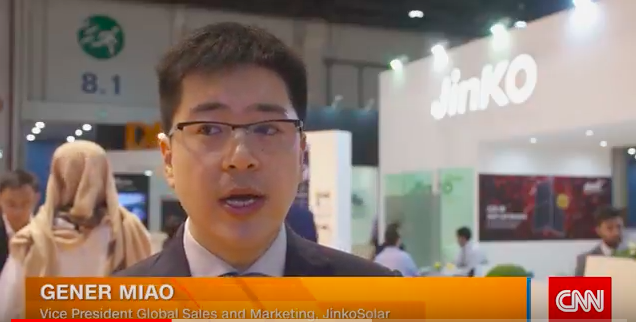 JinkoSolar Holding Co., Ltd. (“JinkoSolar” or the “Company”) (NYSE:JKS), a global leader in the Photovoltaic (PV) industry, today announced that it participated in an exclusive interview with Cable News Network (CNN) as part of the network’s Marketplace: Middle East program. Marketplace: Middle East is a special program at CNN focused on business developments in the Middle East reason. JinkoSolar was featured on an episode dedicated of the program to Abu Dhabi Sustainability Week. Through this coverage, JinkoSolar’s contributions to the solar industry and involvement in the milestone 1177 MW Sweihan Abu Dhabi PV project were broadcasted to a viewership of 340 million households across the world.

The program sought to highlight the rise of renewables in the Middle East region and the world at large.  An interview was conducted by CNN with JinkoSolar Vice President Mr. Gener Miao, highlighting the rapid development of solar in China and the advantages of solar given its shorter project construction timespans.

The program also journeyed to the outskirts of Abu Dhabi to visit JinkoSolar’s world record breaking 1177 MW Sweihan project where they showed the application of JinkoSolar’s high efficiency monocrystalline modules and the innovative utilization of robotic cleaning at the site.

“CNN”s choice to feature JinkoSolar illustrates the rising importance of solar in the world. Given our dual status as the world’s largest and most globalized solar company and the co-owners of the record breaking Sweihan project, we were able to share our unique insight about solar development in the MEA region and the world at large” Mr. Miao noted after the interview. “We were happy to speak on behalf of the industry to show how economically competitive solar has become.”