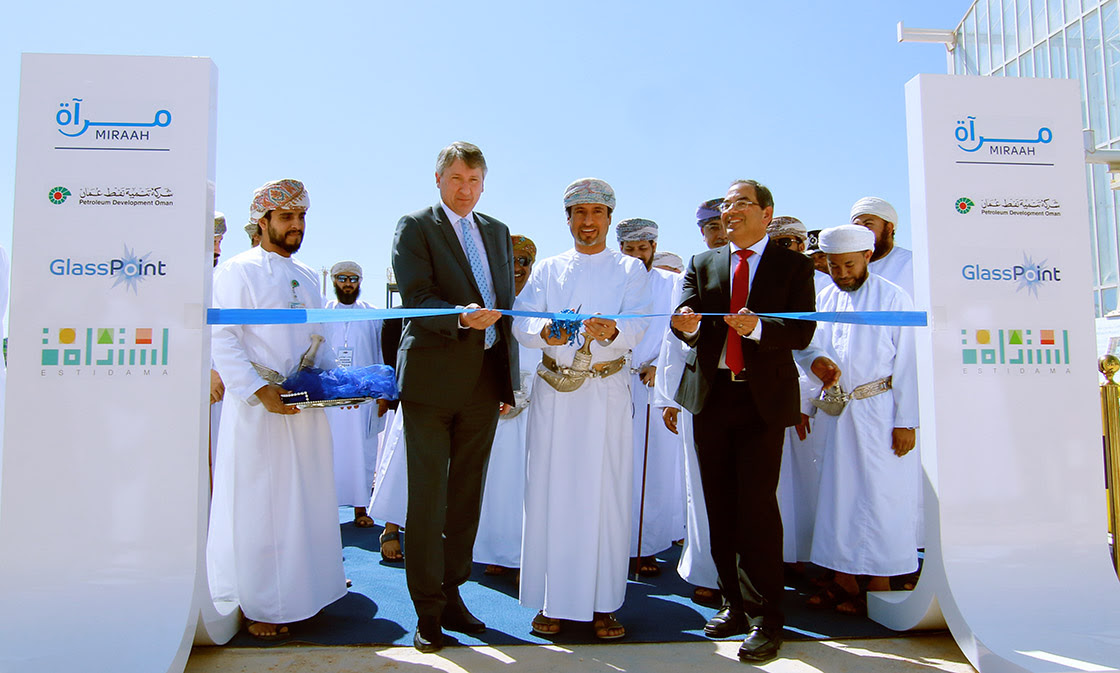 Under the patronage of His Excellency Salim bin Nasser Al Aufi, Undersecretary of the Ministry of Oil and Gas, Petroleum Development Oman (PDO) and GlassPoint Solar have inaugurated the Miraah solar plant. Miraah, located at the Amal oilfield in the south of the Sultanate, will be among the world’s largest solar projects when completed. Four blocks of the plant have now been constructed safely, on time and on budget with steam production integrated with the Amal network. The event also marked the official opening of the Miraah Visitor Centre with more than 200 guests in attendance, including representatives from both the public and private sectors.

“Today marks an important milestone for Oman as it further cements its position as the regional leader in energy convergence, uniting renewable and conventional energy industries. Deploying solar on Oman’s oilfields to reduce the industry’s natural gas consumption has a significant and lasting economic benefit for the Sultanate,” H.E. Al Aufi said.

Miraah will generate real In-Country Value (ICV) and create job opportunities for Omanis, largely from future supply chain development and gas savings directed to other industries. H.E. added, “The project, which stands to be among the largest solar projects in the world, has contributed to developing local Omani talent in the renewable energy field and created job opportunities for local companies. We look forward to exporting our knowledge and expertise to the rest of the world as other progressive oil and gas producers follow in PDO’s footsteps.”

Miraah’s construction has progressed on schedule with 1.9 million safe man-hours completed without a Lost Time Incident since the project started in 2015. The first four blocks were commissioned successfully and the facility is now in daily operation delivering steam to the Amal oilfield. The four blocks have a total capacity of over 100 MWt and will deliver 660 tonnes of steam per day, providing significant gas savings.

Once complete, the one gigawatt installation will consist of 36 blocks built in a sequence, which allows PDO to benefit from solar steam now and gradually ramp-up production over time to meet the Amal oilfield’s steam demand. The project is on track to deliver an additional eight blocks in early  2019.

“This is a very proud day for PDO and our partners GlassPoint Solar. Miraah provides a simple yet innovative solution that allows us to develop our heavy oil, while at the same time reducing energy consumption and costs,” said PDO Managing Director Raoul Restucci.

“For PDO, Miraah represents an important step in our journey to become a fully-fledged energy company, as well as placing the Sultanate firmly on the global renewable energy map with this pioneering project,” he added.

GlassPoint’s solar technology was specifically designed to harness the sun’s energy to generate the steam required for thermal enhanced oil recovery (EOR), seamlessly integrating into existing oilfield operations. The natural gas saved by using GlassPoint’s technology can be exported or directed toward higher-value applications such as power generation or industrial development, helping to diversify the economy.

“Today, alongside our partner PDO, we are ushering in a new era for renewables here in the Sultanate and for the broader oil and gas industry,” said Ben Bierman, Chief Operating Officer and Acting CEO of GlassPoint. “The current climate of low oil prices and the transition to cleaner energy sources, validates the important work we have achieved together with Miraah. Oman is becoming an epicenter of excellence for using solar energy to power oilfield operations and overcome today’s energy challenges.”

Unlike solar panels that generate electricity, GlassPoint’s solution uses large mirrors to concentrate sunlight and boil oilfield water directly into steam. The steam is used for the extraction of viscous or heavy oil as an alternative to steam generated from natural gas. GlassPoint’s innovation was to bring the mirrors and other system components indoors, using a greenhouse structure to protect from wind and sand, which is common in remote oilfields like Amal. The greenhouse enables major cost and performance advantages compared to exposed solar designs, from reducing overall material usage to automated washing operations.

GlassPoint’s partnership with PDO began over seven years ago when they built the first solar EOR project in the Middle East. The 7 MWt pilot project proved the effectiveness and cost efficiency of GlassPoint’s technology and led to significant learnings and design improvements. No other technology has been proven successfully for oil and gas operations. GlassPoint’s track record in Oman has led to the company’s expansion in new markets, including the recently announced project with oil and gas producer Aera Energy to build the largest solar plant in California, USA.