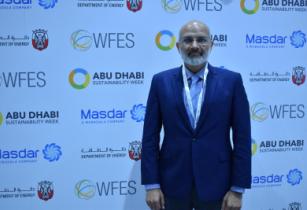 The Middle East region is one of the most attractive markets for the upcoming solar and PV sector. According to the 2019 Middle East Solar Industry Association (MESIA) released yesterday at the Solar Forum during WFES 2019, rapid innovation has allowed solar technologies to evolve quickly and cheap, thus enabling solar energy to become a competitive power generation source.

However, the power output delivered from a PV module highly depends on the amount of irradiance, which reaches the solar cells. The environment is one of the contributing parameters, which directly affect the PV performance. For a dusty region like the Middle East, DSM, coatings provider, introduced Anti-Soiling Coating, an upgrade on its Anti-Reflective (AR) coatings with the same reflective properties and power-gain benefits while being easier and more cost-effective to clean and maintain for solar farms in desert-like conditions.

Vivek Charturvedi, DSM’s Regional Business Director – IMEA, talks about why DSM’s AS Coatings are preferred by nine out of 10 PV glass producers in the MENA region.

“AR Coatings have been around since 2011 but the layer fades off due to multiple factors like sun rays and dust. Therefore with DSM’s AS Coating innovations, the problem was solved.”

AS Coatings two major features beat other competitors, according to Chaturvedi. Firstly, it is not an add-on spray. “For the first time, the AS technology comes in-built the PV panels. Second, the highly reflective properties result in three per cent additional power output.”

In the last three years, DSM has become the lead coatings technology provider to PV glassmakers.

Going forward, the innovations company is looking to tap into solar PV data sourcing. “This has been requested by the project lenders. We have a test site in India and China and in the next six months, we are looking to open three test sites in Saudi Arabia, Kuwait and Egypt.”

Vivek Chaturvedi will be a part of the panel “Ensuring quality throughout the supply chain in solar installations” on 17 January.