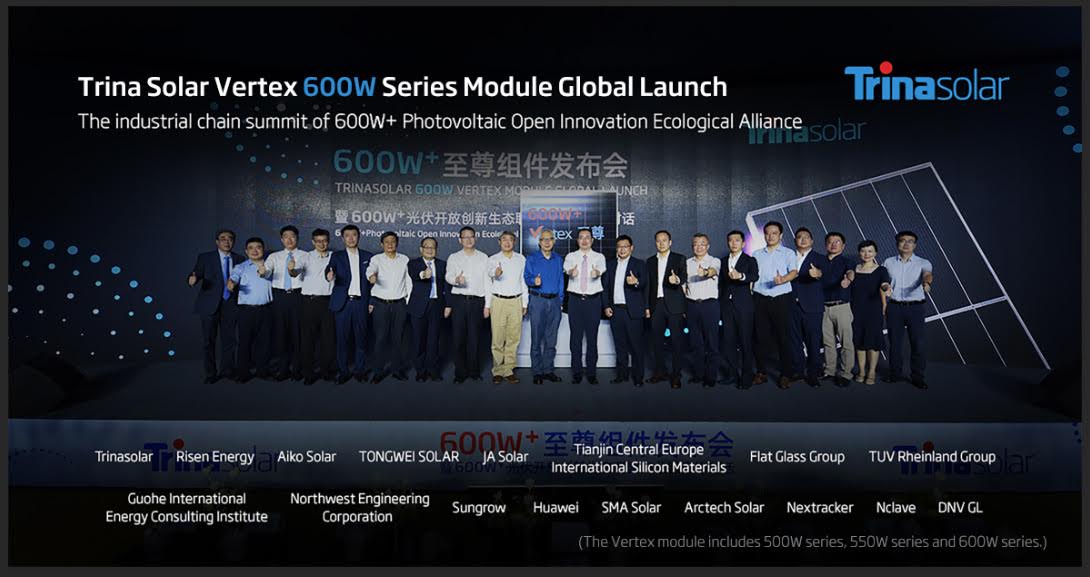 Trina Solar Co., Ltd (‘Trina Solar” or the “Company”) has announced the launch of two next-generation Vertex series modules with power output of up to 600W. The company expects to realize the mass production of a 550W series in the final quarter of this year.

Dr Zhang Yingbin, Head of Product Strategy and Value Management at Trina Solar, said at the event: “The next-generation Vertex modules enhanced by a host of forward-looking innovations, including a 210mm silicon wafer, high-density packaging and multi-busbar technologies, deliver photoelectric conversion efficiency of more than 21 percent. By virtue of low-voltage and high-module string power output, the new Vertex series unlocks huge potential for further reducing balance-of-system costs. By collaborating with key players across the industry chain, we believe the Vertex modules developed on the basis of a new technology platform will help reduce the levelized cost of energy across various applications and maximize customer value.”

Antonio Jimenez, Managing Director and Vice President, Trina Solar Middle East and Africa commented: “With the spike in renewable energy investment we are currently witnessing in the Middle East and Africa we are confident that there will be an increasing demand for the new Vertex series modules to match the growing power needs of the region. We are proud to be a member of the 600W+ Photovoltaic Open Innovation Ecological Alliance that is responsible for revolutionizing the PV modules industry and that the next-generation Vertex series, built on the basis of a new and forward-looking technology platform, has been recognized by key partners across the photovoltaic industry chain.”