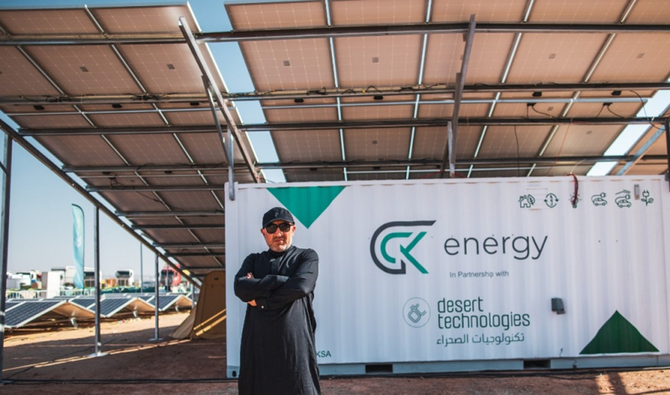 Saudi solar energy firm Desert Technologies (DT) has won the Middle East Solar Industry Association’s (MESIA) “Best Innovation” award in the field of renewable energy in the Middle East and North Africa (MENA) for 2020. The award recognizes DT’s Sahara containers, which are considered a scientific and technological revolution in renewable energy. DT produces the containers at its factory in Jeddah.

The announcement came during a ceremony of MESIA’s ninth edition of the awards in Dubai. The annual awards event serves as a platform to identify and celebrate exceptional talents and achievements and honor pioneering projects in the solar energy market in the MENA region. An expert group of judges specializing in the field of renewable energy from international and regional institutions evaluate competing projects to declare the winners.

Khaled Ahmed Sharbatly, managing partner of DT, received the award in the presence of Ahmed Nada, president of MESIA, and an audience of specialists and professionals involved in the manufacture and production of solar energy.

“We are happy to receive the Middle East Solar Industry Association’s Award in the ‘Best Innovation’ category for the year 2020, which is one of the most prestigious global awards in the field of solar energy, because of its neutrality,” said Sharbatly.

He added: “This victory not only reflects the entrenchment of creativity and innovation at Desert Technologies, but also confirms the added value resulting from the strong collective work as a catalyst for innovation. This comes within the framework of the company’s keenness to support the development of Saudi industries and contribute to achieving the goals of the ‘Made in Saudi Arabia’ program, which is a fundamental program for achieving the goals of the Kingdom’s Vision 2030 Vision, diversifying sources of income for the national economy and strengthening the position of Saudi products at the global level in accordance with the highest standards of reliability, thus, contributing to stimulating local investments, attracting foreign investments, creating job opportunities and enhancing export capacity.”

Nour Moussa, founder and CEO of DT, said: “Nothing compares to the immense pride we take in this achievement; this recognition motivates and drives us to produce more creativity. Since its foundation, DT has made a clear impact on the competitive scene in the renewable energy industry in the Middle East and North Africa. Sahara solar containers are a landmark in the solar energy industry, allowing us to live and work to our full capacity off-grid anywhere, with sunlight generating electricity in events, settlements, defense operations, disaster relief and more.

“DT launched two containerized solar systems of Sahara — each 40 feet and 20 feet in height — which generate up to 100 kWp of pure solar energy, which provide power during the day directly from the solar system while allowing for electricity through a battery bank during the night. They are easily installed and operate silently 24/7, unlike diesel generators, and require minimum maintenance. DT showcased the power of the 40-feet Sahara containers to the world during the 2021 Dakar Rally, and before that, in Africa supplying electricity to areas peripheral to the main grid, where one container is sufficient to meet the basic needs of about 70 small homes. It provides immediate sustainable energy in remote areas and is the best alternative solution for costly conventional energy in implementation and maintenance.”