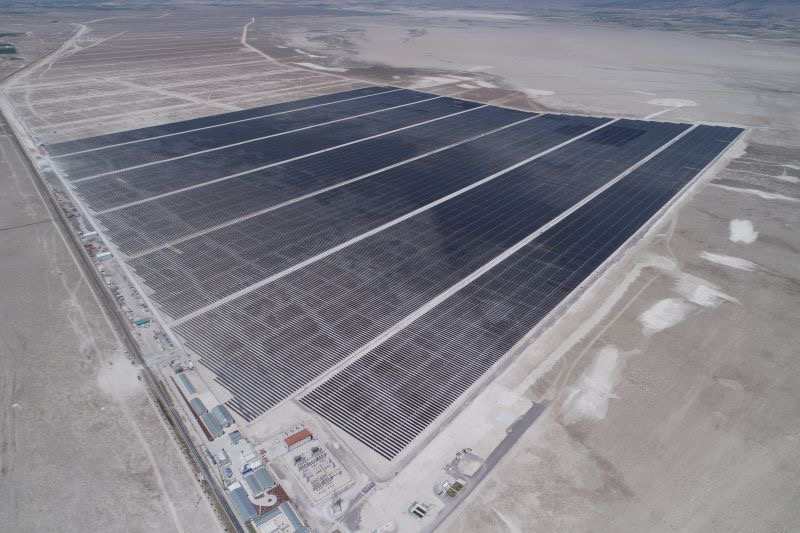 Turkey, June 16th.- PV Hardware (PVH), one of the world leaders in innovative solar tracking solutions, is consolidating its presence in Turkey by supplying 530 MW in the 1300 MW Karapinar project being implemented by Kalyon and General Electrics with the support of local partner Inogen in the mechanical assembly and domestic production. Currently, the Spanish company has already completed the first phase installation of 260 MW, and the first 40 MW of the 270 MW comprising the second phase.

Karapinar uses the company’s Axone Duo solar tracker, designed and tested in adverse weather conditions. As explained by the company’s Managing Director in the Middle East, Álvaro Casado, “The weather conditions present in the project, caused by the strength of the wind and the snow load, in addition to the flat terrain, do not present any difficulty for the adaptability of the tracker, demonstrating that it is the optimal solution for the project”.

After announcing that it will open its first local manufacturing facility in Saudi Arabia, PVH continues to expand its dominance in the Middle East with innovative technology and a rapid pace of industrial supply in the region’s market. “Karapinar is a very ambitious project, currently the largest in Turkey, so for us it is a remarkable milestone in our expansion strategy in the region,” said Mr. Casado.

He also pointed out “the privilege of having local partners such as Inogen, with whom we beat the record in terms of construction and commissioning rates and with whom we generate economic activity for the development of local communities”.

Inogen and PVH became partners in 2017 to extend PVH activities in Turkey & CIS countries. PVH and Inogen localized the production of the system and this enables investors to get an incread feed in tariff (YEKDEM ) due to domestic production. As a nature of this joint venture PVH-Inogen partnership supplies local or export materials depending on the financial structure of the project.

Inogen – PVH partnership, that is planning to continue deliveries till the end of 2022, is also bringing the advantage of installing its own products with its own experienced teams which eases the facilitation of the projects.

Kalyon invested in a 1000 MW / year manufacturing plant starting from Si Ingot production and for now it is the only entegrated supplier in Europe in PV technologies. Kalyon is capable of producing 400 to 530 Watt Bifacial Frameless modules which increases the AEP significantly and drops O&M costs due to its easy clean nature.

Together with the Axone Duo units, PVH has installed its controllers integrating the 3D adaptive backtracking algorithm to maximize the plant’s production. Thanks to this algorithm, we avoid the unevenness in the mounting of the trackers and the ground itself, as well as avoiding shadows along the entire tracker and the hot spots they generate.

PVH is currently in a process of expansion, negotiating new projects and demonstrating why it is one of the technological leaders in the industry and one of the most solid installers worldwide.

About PV Hardware: PV Hardware (PVH) is a provider of innovative solar tracking solutions for the global solar energy market, including solar trackers, fixed structures and SCADA systems. Each product designed by PVH can be easily installed on any type of terrain, endures different weather conditions, and is prepared to withstand high winds, supporting all types of modules, including thin-film and bifacial. Founded in 2011, PVH has supplied more than 11 GW to photovoltaic plants operating in various countries around the world. As a result, PVH has the expertise to properly manage solar tracking installations of any capacity, anywhere.