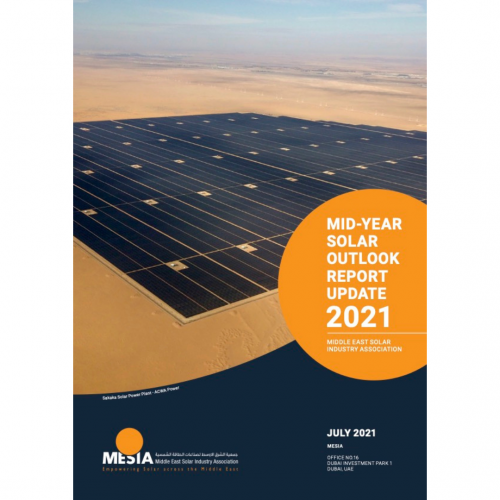 The mid-year report is a more concise version of the MESIA Annual Outlook Report to be published in January 2022 but also features an insert on Qatar, which was not present in the report’s full edition. For the first time as well, the report will be exclusive to MESIA members for 90 days (as well as press/media on-demand) before becoming public domain in September 2021.

The region never fails to break world records in the solar industry. After an unprecedented year, the pandemic did not impact the solar energy market as severely as anticipated. In April, the world witnessed one of the lowest bids for solar projects ever, recording $0.0104/kWh, at the Kingdom of Saudi Arabia’s REPDO Round 2 tenders of Al Shuaiba PV IP project.

The decrease of carbon emissions during 2020 has served as a wakeup call for countries to better understand the steps and actions required to achieve the goal of carbon neutrality. To be specific, the MENA region has ambitious targets to increase its investments in the energy sector over the next five years. KSA leads the way among other countries to improve their commitments to the green energy transition.

Solar projects are currently moving ahead in many MENA countries. The trend of MENA governments focusing on energy diversification through the implementation of large-scale projects is set to continue in the future.  In Qatar, a strategy to implement 4 GW of solar by 2030 is in place, along with, Al-Kharsaah PV project targeting the roll out of 800 MW of capacity by 2022. Algeria is also stepping up to implement a 1 GW solar scheme in 2021 and ultimately develop solar power plants in the country, having a total capacity of 4 GW between 2020 and 2024.

Kuwait just announced that an additional 3.5 GW of renewable energy from PPP projects shall be added by 2027. KSA on the other hand is moving ahead with its REPDO projects and other mega scale PV plants.

MESIA is the largest solar trade association in the Middle East and North Africa region. Established in 2009, the association represents over 150 international and local organizations including investors, installers, manufacturers, law firms, consultants, policymakers and banks. MESIA is headquartered in Dubai, UAE and carries out solar-related activities and programs across the MENA region. Its regional coverage stretches from Morocco to Saudi Arabia, from Egypt to Oman, with over 10,000 subscribers across the MENA region. Over the past 10 years, MESIA has organized over 70 industry events focused on strengthening the footprint of solar energy in our region, including trade missions in KSA, Egypt, Pakistan and Jordan. Along the way, MESIA has won several prestigious awards and had been recognized by leading government authorities across the MENA region. MESIA also publishes industry-leading reports which have been featured in the New York Times, Wall Street Journal and the FT. To learn more about MESIA visit www.mesia.com.