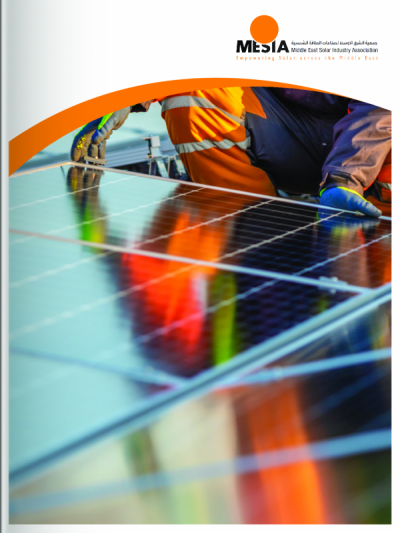 First Published on EME Outlook
An overview of the growth of renewable energy across the Middle East and Northern Africa, and the increasing exploitation of solar power
Writer: Phoebe Harper  |  Project Manager: Krisha Canlas

Over the course of the COVID-19 pandemic, global carbon emissions fell at their fastest rate since the Second World War. In line with this drop, the acceptance and use of renewable energies (RE) continued to grow on a promising trajectory.
As revealed by bp’s Statistical Review of World Energy 2021, during this time, the use of solar power across the world recorded its largest ever increase. Although wind energy contributed the highest growth in renewable resources, solar electricity rose by an unprecedented 20 percent to 1.3 exajoules (EJ), with overall solar capacity expanding by 127 gigawatts (GW).
Until recent times, the hydrocarbon-rich economies found throughout the Middle Eastern and Northern Africa (MENA) region, have been perceived as generally falling behind in the development and deployment of RE. Saudi Arabia in particular has come under scrutiny as the world’s 10th-largest emitter of carbon dioxide, leading to a subsequent net zero pledge to reach this commitment by 2060 in time for the COP26 climate change summit.
Indeed, in terms of global regions, MENA has the lowest share of renewable energy in terms of overall energy consumption. The aforementioned bp report found that RE accounted for less than 1.5 percent of all electricity generation across the region, compared to the worldwide average of more than 10 percent.
In spite of this, the MENA region boasts enormous RE potential, particularly within both solar and wind power. The Middle East Institute (MEI) estimates that, if fully exploited, MENA would have the capacity to produce solar power to a level that would amount to 60 percent of global electricity demand. Across the region’s landscape, the majority of areas boast a solar potential of daily direct normal irradiation (DNI) above five kilowatts (kWh) per square metre – a key indicator that solar power is economically viable.
Fortunately, the acceptance of solar power across MENA is growing, in alignment with the increasingly affordable costs of the technology and systems to facilitate it. The technology behind PV modules is advancing, and so is battery storage, as the solar market matures.
From 2015 onwards, the development of RE across MENA has enjoyed significant growth, as shown by the International Renewable Energy Agency (IRENA). In 2016, $11 billion was invested in RE across MENA – a staggering leap compared to $1.2 billion in 2008.
Reflective of this heightened investment, Saudi Arabia is now considered a global frontrunner in RE development with the country marking a world record for solar prices from the SakakaPhotovoltaic Solar Project – a 300 megawatt (MW) solar project located in Al Jouf Province. Sakaka is significant as the first ever utility scale RE project to be included in the National Renewable Energy Programme of Saudi Arabia.
In the oil-rich lands of the UAE, RE is becoming increasingly attractive thanks to the falling costs of the necessary technologies, as the country transitions from an oil exporter to major importer of natural gas. With economic conditions favouring greater RE deployment, the UAE is being encouraged to exceed its current targets. Such advancements will only be possible with the greater involvement of government agencies in regulation and tendering within the energy sector.
The growing use of RE across MENA is intrinsically linked to the area’s socio-economic development, as its deployment will not only reduce carbon emissions, but also increase economic diversification and growth, a healthier balance of trade, and opportunities for job creation. This is best exemplified by Morocco, where the development of a local industry surrounding solar water heaters has served to create 13,000 jobs.
Across the region, the combined energy goals of various countries translate to an expected 80 GW of renewable capacity by 2030, based on the successful fruition of these commitments. This is evidenced by initiatives such as the Pan-Arab Clean Energy Initiative (PACE), a key component of the future roadmap for renewables across MENA.

As the most respected non-profit trade association in the renewables sector, President of MESIA, Ahmed S. Nada, discusses the upwards trajectory of solar energy across the MENA region and leveraging a digital presence to further its goal of promoting a solar-powered future.
The Middle East Solar Industry Association (MESIA) was established in 2009, as a non-profit trade association dedicated to the promotion of solar energy across the Middle East and Northern Africa (MENA). As a highly respected and industry-leading advisory voice, MESIA continues to fully support and guide its members in an ever-evolving industry, whilst disseminating invaluable information on the potential of solar energy. Since its inception, MESIA has expanded to include over 100 local, regional, and international members. We speak with President of the association, Ahmed S. Nada, to find out more.
EME Outlook (EO): Can you talk us through the origins of MESIA; how it came about and its initial vision?
…..
Ahmed S. Nada, President (AN): MESIA was created when a group of individual solar pioneers came together with the aim of bringing the initial knowledge of the industry to the Middle East, which has historically been a region that is reliant on fossil fuel energy. The group was led by Vahid Fotuhi, who at the time was working for BP Solar, and Professor Georgeta Vidican, who used to work for Masdar Institute. After a successful launch event on November 23rd 2009, the group established a steering committee made up of the key value chain players in the solar industry. MESIA became licensed by the Community Development Authority (CDA) in Dubai to operate as a not-for-profit trade association in 2013.
These players went on to become the founding members of MESIA, successfully instilling the roots of what would emerge as the largest and most respected solar association in the MENA region, now forming a group of 70 regional and international companies and hundreds of members.

EO: Since inception, how has MESIA developed and progressed in terms of its key objectives and the messages it tries to get across?
…..
AN: The mission of MESIA as a non-profit, non-governmental organisation remains fundamentally the same as it was at its inception. Our primary goal remains the promotion of solar energy in the MENA region, but the world today is not the world in which MESIA was created. The market has matured, positive adoption of solar and technology has reached advanced stages, and so our goals have evolved to continue supporting our members through different means. Increasing our digital presence has been a prime goal to become the largest digital solar network in the region by providing news, promoting digital solar technologies and creating unique promotional digital event opportunities for our members. We remain a knowledge transfer and sharing solar platform but with a digital spin.
EO: What do you find most exciting about working within the renewable energies sector?
…..
AN: Advancing the agenda of renewables in our life in general, and solar in particular, has been the key driver and most exciting part of this journey. Today, we see how competitive solar can contribute to storage, and green hydrogen is making this journey even more exciting. Competitive solar energy prices per kWh is enabling even more green technology offerings.
EO: On the flip side, what are its biggest challenges?
…..
AN: Like any industry, the solar industry can face disruptions in its supply chain, causing the economics of projects to be distracted from their original plans. As the world wakes up from COVID-19 and its implications on all industrial value chains, the solar industry will have to adjust. Hence, MESIA must continue to voice its mission to keep supporting its members.

“We would like to extend our reach to universities and students, but also training to support educational programmes and initiatives that are inclusive and will promote growth and talent within the industry”

EO: What trends are currently transforming the renewable energies sector across the MENA region? How are you responding to them?
…..
AN: Each day, a new country in the MENA region sets new goals for net zero. Green hydrogen generated from renewable energy, and particularly from solar projects, will make a fundamental transformation to our region. Further electrification means more renewables penetration to the grid, which in turn will add more pressure on storage technologies.
In terms of response, the political and economic willingness of our leadership is obvious and pronounced in the MENA region across its large economies, Gulf Cooperation Council (GCC), Egypt and hopefully soon North Africa. MESIA continues to be part of the agenda, setting policy support and technology promotion through its digitised platform and soon, more face-to-face events.
EO: Have you got any projects in the pipeline you wish to highlight?
…..
AN: MESIA wants to further engage with the new generation, the younger students whose education platforms will see more engagement with renewables and the electrification of their lives. It is critical to keep them engaged for the future. Next year, our Solar Awards will be celebrating their 10th anniversary, and with it, new categories have been created to reflect industry changes. Submissions are always free of charge, and we will continue holding this event as an unbiased celebration of top solar performers in the region. Also, our flagship report will again be released in January at the World Future Energy Summit, covering new areas, countries and expert contributors. To view the 2021 Outlook report, click here.
EO: How do you see MESIA developing over the next five years?
…..
AN: We believe it is important that we continue developing the support that we provide to our members, from positioning to entering the market, and creating incremental solutions to do so. Ensuring we deliver both quality content and unique networking opportunities will continue to remain at the centre of our initiatives. Additionally, we would like to extend our reach to universities and students, but also training to support educational programmes and initiatives that are inclusive and will promote growth and talent within the industry.
EO: Finally, are you optimistic about the future of the sector across MENA?
…..
AN: Absolutely. It is clear from looking at GWs installed to future project announcements, and with net-zero commitments expanding in the UAE and across the entire region, that the future for solar and sustainable energy sources is on a path to continuous growth. There is an increased consciousness of the need to do more about building a more sustainable world all around, and energy is at the core of it.
Read More