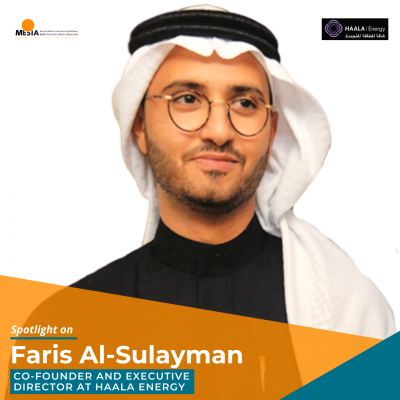 MESIA had the pleasure to meet Halaa Energy’s Co-founder Faris Al Sulayman to know more about his experience in solar as well as the company’s current and future plans for the near term.

Haala Energy’s story began in 2016 when two of the cofounders, Faris Al-Sulayman and Rowan Jandu, were working in energy finance and consulting in the UK and realized that the planned energy subsidy reform in Saudi Arabia would finally allow for commercial and industrial scale solar PV to take off in the Kingdom. The early years were slow, because when a subsidy reform took place, it only affected some of the tariff segments, and regulation of commercial scale PV was also slow to catch up. But by 2018 the steep decline in the prices of PV components made subsidy reform less relevant, and the off-grid segment in particular became increasingly attractive. Many companies have come and gone since those earlier years, but those that have managed to stick around- like Haala- are now well positioned to take advantage of the new opportunities popping up around the Kingdom.

I am a Co-founder and Executive Director at Haala Energy, where I lead on strategy and growth. I am also currently a PhD candidate at the London School of Economics, where I work on energy transitions in the Gulf states. The combination of these two roles means that I am often thinking and writing about public policy and the big picture, how the transition is likely to play out in Saudi and the other Gulf states, and what opportunities might lie ahead for young companies like Haala. Day to day, I have been focused on growing the Haala Energy team, and more recently on our upcoming Series A, as we look to raise capital from strategic investors in the Kingdom to fund our growth strategy.

We think we have the best team in the Kingdom in the commercial and industrial segment. We care about the details and put a lot of thought and care into the design and installation of our systems. This is illustrated by our partnership with the KAUST Solar Center, with whom we have collaborated on a number of research projects aiming to understand and establish best practice for solar PV installations in harsh desert environments. Our most recent project with the center looks at how certain racking configuration on corrugated metal roofs can trap heat beneath modules, degrading performance and causing damage in the long run. Our clients can now benefit from the experience and knowledge our team has built on this topic and others.

Haala Energy is laser focused on the C&I segment in Saudi Arabia, both on grid and off. We have built a diverse portfolio of projects that now includes innovative greenhouse and agri-voltaics with the likes of Red Sea Farms, large hybrid systems for off-grid clients, and urban rooftop as well as car park projects with complex steel structures and robotic cleaning. Our pipeline is even more exciting with larger projects planned for this year, and some strategic partnerships that we hope to announce by this summer.

Haala Energy has been a MESIA member since day 1, in-fact before we even hired our first employee. We’ve contributed to nearly every annual report in some capacity and have found the platform to be a great resource for insight into what is going on in our neighboring countries, how their solar industries have developed, and what trends we can expect in our home market moving forward.

Brief Bio:
Faris Al-Sulayman is the Co-founder and Executive Director at Haala Energy, a solar installer and developer working at the commercial and industrial scale in Saudi Arabia, and a PhD candidate at the London School of Economics, where his research focuses on the political economies and energy transitions of the Arab Gulf states. Al-Sulayman is also a research fellow at the King Faisal Center for Research and Islamic studies in Riyadh. In the recent past Al-Sulayman has held research positions at the Woodrow Wilson International Center for Scholars, Arabia Monitor, and Georgetown University.