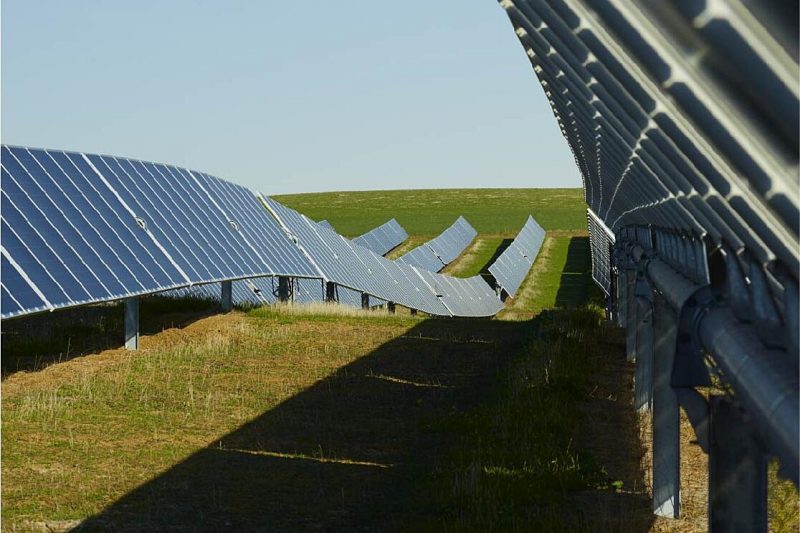 FREMONT, CA, March 22, 2022 — Nextracker™ today launches NX Horizon-XTR™, a terrain-following, single-axis tracker designed to expand the addressable market of solar power on sites with sloped, uneven, and challenging terrain. Nextracker began deployment and empirical testing of NX Horizon-XTR at utility scale three years ago, working closely with customers that faced capital expense and construction challenges on project sites with hilly terrain. Savings in the millions attributable to reduced grading and shorter piles has been validated on select utility scale projects. Today over 15 NX Horizon-XTR sites are operational and dozens of additional projects are under design and construction in the U.S. and abroad. Watch video explainer, here.

“NX Horizon-XTR’s ability to follow terrain can significantly reduce earthwork, allowing these otherwise-infeasible sites to become economically and environmentally viable solar projects. Less earthwork means lower upfront costs and improved scheduling. XTR has allowed us to win more projects by making us more competitive in our project bids, while also lowering our impact on the environment,” said VP of engineering, Donny Gallagher of SOLV Energy, one of Nextracker’s EPC (engineering, procurement and construction) partners that has deployed and field-tested NX Horizon-XTR.

“This is a smarter, more streamlined way to build solar on challenging terrain,” said Nick de Vries, SVP Technology & Asset Management at Silicon Ranch. “There are some things you cannot out-engineer, and in my experience well-established topsoil is one of them. Deploying traditional trackers on sites with varied terrain has required extra earthwork and longer foundation piles, which increases project costs and adds risk. Earthwork is especially painful as it affects a solar project three times: first performing grading, next reseeding the exposed dirt, and later fixing the inevitable erosion & hydrology issues that come from the lack of well-vegetated topsoil. For Silicon Ranch, high-quality solar projects and being good stewards of the land go together, so conforming to the native ground contours with Horizon-XTR just makes sense.”

“A big factor in Nextracker’s DNA is listening to our customers, evaluating their requests, and where feasible, integrating their suggestions into our product development,” said Nextracker CEO and founder Dan Shugar.

“Over 3 years ago, SOLV (formerly Swinerton Renewable Energy), pushed us to develop a terrain-following solution and the result is our XTR product line. We worked closely with them and project owners to integrate their requirements and complete lab and field-tests of a terrain-following tracker. We offered a few years of exclusivity for SOLV that we executed together, and then rolled out the technology to the global market. As the world races to meet clean energy goals, NX Horizon-XTR opens a new frontier for solar developers to affordably build on sites that were previously cost prohibitive, while treading lighter on the environment.”

• NX Horizon-XTR breaks the paradigm of the “straight-line row” design constraint by conforming to the existing ups and downs of north-south ground slope undulations, so that trackers no longer require installation along a single plane but can follow natural site contours.

• NX Horizon-XTR builds on the over 50 gigawatts of NX Horizon tracker deployments.

• It has already been constructed on over three gigawatts of cumulative projects, with more projects under construction or in late-stage development around the world.

• XTR sites see significant savings in both capital expenditures and operating expenses on select sites. That includes up to 30-90 percent less “cut and fill” earthmoving work and piers up to 36 inches shorter.
According to a 2021 Wood Mackenzie Power and Renewables report, the U.S. tracker market grew by 34% in 2020. Nextracker maintained its position as the top global solar tracker vendor with 29% of the global market share.

Nextracker is the leading provider of intelligent, integrated solar tracker and software solutions used in utility-scale and ground-mounted distributed generation solar projects around the world. Our products enable solar panels in utility-scale power plants to follow the sun’s movement across the sky and optimize plant performance. With over 50 gigawatts shipped worldwide, Nextracker leads the solar industry with solar tracker technologies that optimize and increase energy production while reducing costs for significant plant ROI. For more information, please visit Nextracker.