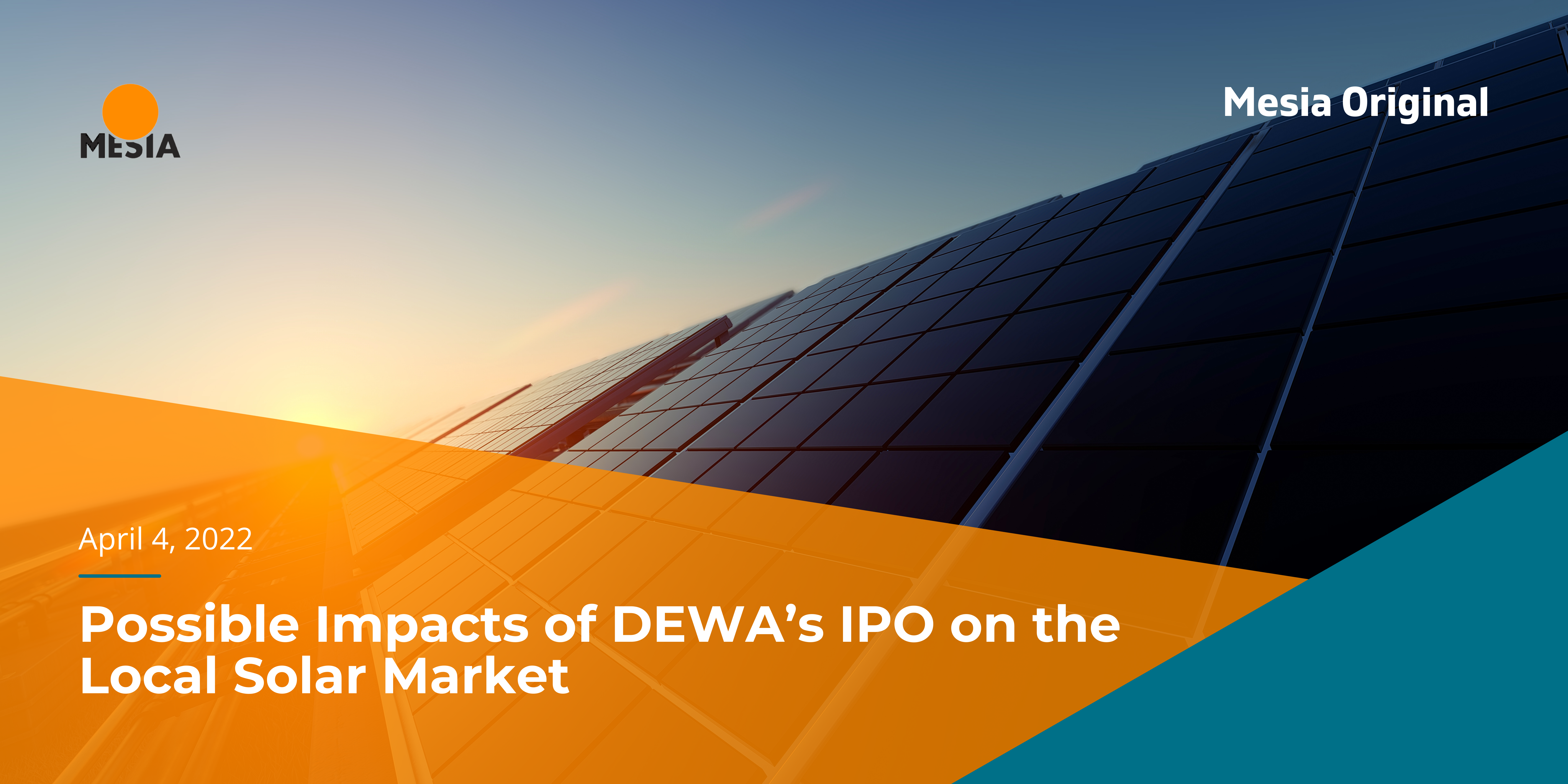 Dubai Electricity and Water Authority (DEWA), the pillar of Dubai’s green energy transition and the strategic supporter of the emirates 2050 Net Zero Carbon Emissions national plans, decided to close the first quarter of 2022 by going public. The company listed 6.5% of its issued shared capital in the Dubai Financial Market (DFM) on March 24, 2022, the first government entity in Dubai to wave.

The 6.5% equals 3.25 billion shares offered split into three tranches: 8% for individual subscribers, 90% for professional investors, and the remaining go to employees of DEWA. The company already has more than 10% of its energy from renewable resources. Achievements are continuing the Mohammed Bin Rashid Al Maktoum Solar Park now in phase 5 towards adding 900 MW. Construction included CSP and PV with 950MW by phase 4, 800MW from phase 3, 200MW supplied by Phase 2, and about 1 GW by the first phase. Despite the challenges of the pandemic, the projects shall endure while finances need to catch.

The question is, what does this mean for the local solar industry? The initial public offering (IPO) allows the company to access more equity and compete more effectively. Supported by a history of significant improvement in its financial profile resulting from tariff revisions in March 2008 and January 2011, as reported by Moody. The report also considers that DEWA’s credit profile is tied to the economic and fiscal developments of the emirate. A city populated by almost 4 million residents and visitors and with a current growth rate of around 1.47% and potentially reaching 6 million by the year 2050.

Although the ground on which DEWA started to initiate the IPO looks promising and the news surprising, it is not the first in the region. In October last year, the neighboring Abu Dhabi’s ADNOC increased its listed shares of IPO to 11% because of oversubscription as reported by Reuters. And before that Saudi’s oil company Aramco went public in 2019. As major companies in the energy sectors go public comes more transparency.

This transparency in the solar market can be built gradually by integrating customers-producers in the grid, launching national goals mapping the future of energy, and allowing the public to invest in giant energy companies. However, it asks an obvious question, would attracting investors to governmental companies pull the rug from under the medium or small solar companies?

The main task before listing a governmental entity in the financial market is to define guidelines and enforce rules. When going public, the governmental company will add competition and create a higher level of contest among the players resulting in advancing the services in the energy industry. Why? Because the dollar is looking for the best return on investment. Another possible impact of DEWA’s IPO in the local solar market could be a surge in establishing new energy companies which leads to more innovation and creativity in the energy sector of the future.

The use of digital services improves the agility of the company to deal with different energy scenarios. They are adding business value and encouraging the expansion of the company. Fourth Industrial Revolution technologies like Artificial Intelligence (AI) can actively increase the readiness and resilience of the company’s infrastructure to collect and deal with big data. An example of that is the data from smart meters. The processing and analysis of such data can increase efficiency and reduce consumption. As well as enable users to monitor their energy consumption. Another example is the consumption data from electric vehicle charging stations.

While DEWA is enjoying leading benefits, risks are always there and need to be identified. There are two types of risk, internal and external. For our ease, we will discuss the external risks like the market and environment.

For the market, the profit potential is an issue and how likely it is to match the plan and keep within the percentage of error. In other words, will all external factors move within the expected changes in the market and still be the benefit of the decision? What about the environmental risks and how much do we know? How much agility does a safe disposal long-term plan for a huge number of out-of-service solar system materials have?

It has always been a dilemma of matching the environmental goals with the financial. In our way to do so, we go through phases of challenges, on an international level, on a governmental level, and as individuals. An initiative worth mentioning is Shams Dubai (Arabic translation of Sun of Dubai) is an initiative that encourages households and building owners to install PV panels to generate electricity and connect them to DEWA’s grid. The generated electricity is used on-site and the surplus is exported to DEWA’s network.

In this system, instead of only being the consumer, the resident will become a producer of energy paying only for the amount pulled from the grid if any. Contractors today find a great opportunity to support Dubai’s solar industry by working with DEWA to ensure a successful match.

Going green is what we know as the available right decision, environmentally, economically, and geopolitically. Dubai’s Authority plans for 100% renewable by 2050. The plan opens the opportunity for the market to grow. In the region, Dubai is one of the first cities -if not the only city- that launched a promising strategy and goals mapping the future of energy until 2050.

We are witnessing the transformation in the energy sector. From the negative environmental impacts to the social strikes, only the financial part of the Triple Bottom Line can close the cycle and move the ship forward. DEWA’s IPO move is a new model and all of us are waiting to see its effect on the solar market and in the region.

MESIA is the largest solar trade association in the Middle East and North Africa region. Established in 2009, the association represents over 70 international and local organizations including investors, installers, manufacturers, law firms, consultants, policymakers, and banks. MESIA is headquartered in Dubai, UAE, and carries out solar-related activities and programs across the MENA region. Its regional coverage stretches from Morocco to Saudi Arabia, from Egypt to Oman, with over 66,000 subscribers across the MENA region on all platforms.

Over the past 10 years, MESIA has organized over 70 industry events focused on strengthening the footprint of solar energy in our region, including trade missions in KSA, Egypt, Pakistan, and Jordan. Along the way, MESIA has won several prestigious awards and had been recognized by leading government authorities across the MENA region. MESIA also publishes industry-leading reports which have been featured in the New York Times, Wall Street Journal, and the FT. To learn more about MESIA visit www.mesia.com.