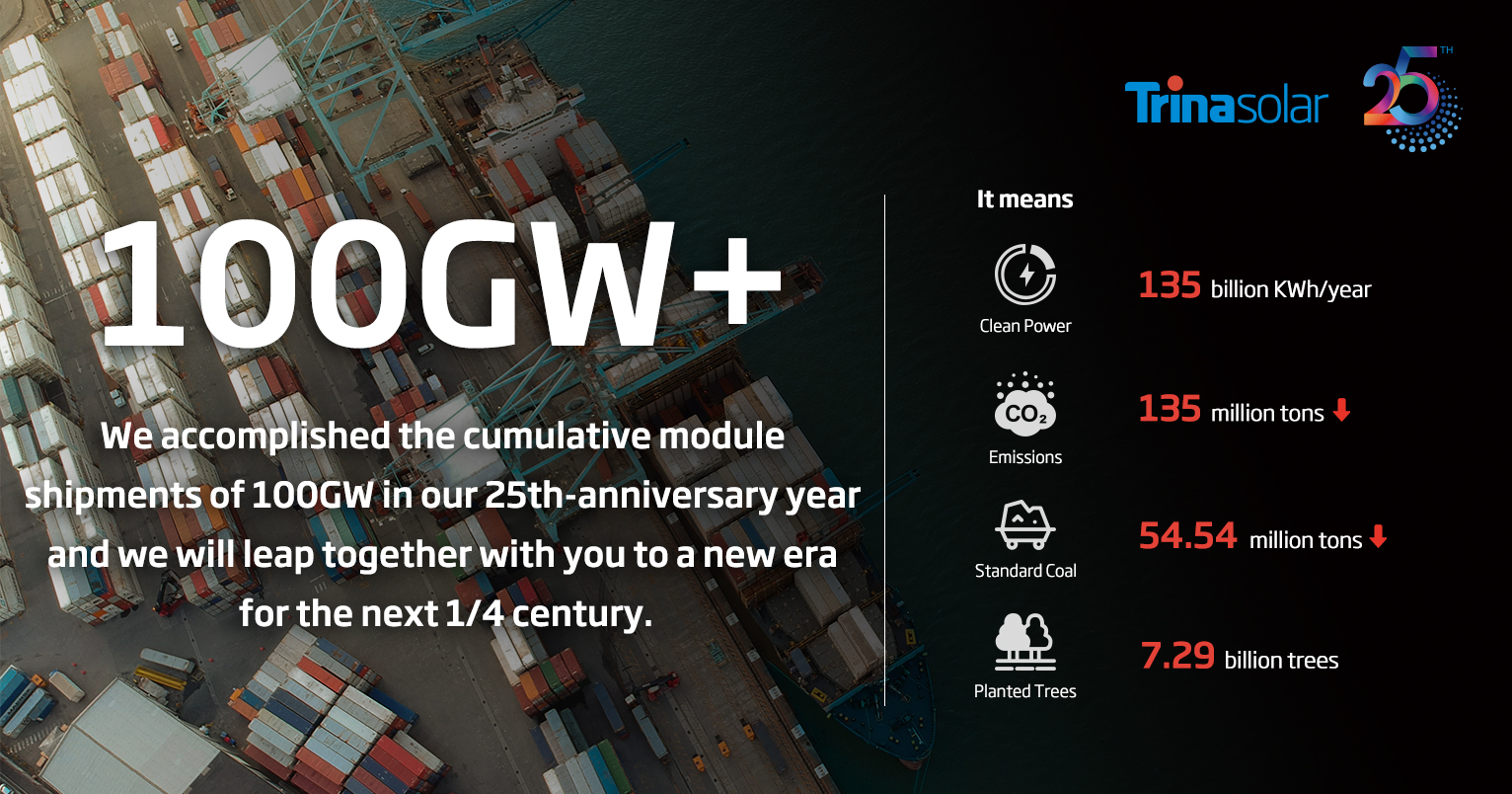 Dubai, UAE: 26 April, 2022: Trina Solar, the global leading provider for photovoltaic (PV) module and smart energy solutions, has reached a remarkable milestone, having shipped 100GW of modules in the 25 years since the company was founded in 1997.

“We are very proud to achieve this significant feat at Trina Solar. Marking the 100GW of shipments is the beginning of a new energy era where solar PV is the main driving force. As we mark a quarter of a century, Trina Solar renews its commitment to lead the solar industry in facilitating the conversion to a carbon-free new world,” said Gao Jifan, Chairman, Trina Solar.

Global clean energy development is now running at full tilt, and the International Renewable Energy Agency forecasts that global PV installations will exceed 14,000GW by 2050 as new energy, including solar energy, becomes a major source of energy and electricity consumption. Trina Solar’s high value 210 technology modules are mature in full cycle, and the ultra-high-power modules have been deployed worldwide.

Antonio Jimenez, Vice President and Managing Director, Trina Solar Middle East & Africa Region, commented: “We are extremely happy with this significant achievement which comes at a time when we also celebrate our 25th anniversary. With Dubai as the regional hub for clean energy and energy innovation, we will continue to use open technology innovation to enlarge the scope for growth and achieve sustainable development, leading the industry towards the vision of a green and carbon-free economy”.

As a leading PV company, Trina Solar has been pioneering solar technology for the past 25 years, as the diameter of silicon wafers has grown from 125mm to 210mm and module power has grown from less than 100W to 690W. In technology and innovation, Trina Solar has set a total of 23 world records for PV cell-conversion efficiency and module output power.

Based on its excellent product performance, Trina Solar is the only PV company to score 100% in the Bloomberg New Energy Finance Bankability Survey for six consecutive years as a top bankable module supplier. The company has also achieved excellent test results in the PVEL (PV Evolution Labs) Product Qualification Program for seven consecutive years. Trina Solar’s 100GW of PV modules have been shipped to more than 100 countries.

PV power generation is a major source of clean energy deployed in many areas, from utility projects to household rooftops around the world.

Inspired by the signing of the Kyoto Protocol in 1997, Trina Solar was founded that year with its headquarters in China’s Changzhou city, making it one of the world’s earliest photovoltaic (PV) companies. 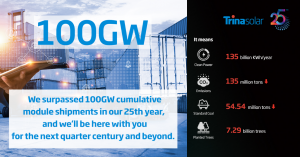