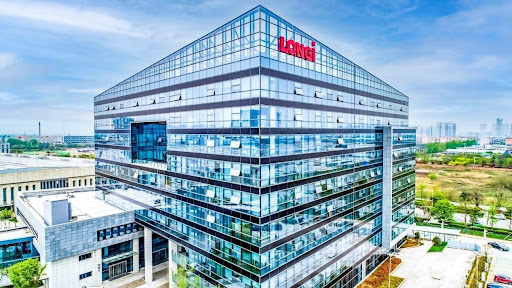 In the H1 of 2022, LONGi achieved the shipment of 39.62GW of monocrystalline silicon wafers, of which 20.15GW was sold externally and 19.47GW for internal use. The shipments of monocrystalline modules reached 18.02GW, of which 17.70GW was sold externally (including 87.35MW of BIPV modules) and 0.32GW for internal use. Although the U.S. market is impacted by the WRO (Withhold and Release Order) and the increased warehouse cost, the company timely adjusted its operating strategy, shifting the focus of sales to other key markets such as Europe. With quality product service, brand awareness and channel layout of long-term accumulation, LONGi has maintained good competitiveness and its overseas business is also developing rapidly.

Data show that in the past three years (2019-2021), the overseas revenue of LONGi accounted for 38.38%, 39.32% and 46.89% respectively, and the overseas market has become an important sales ground for the company. This year, the European Commission formally launched the “RE Power EU” plan, which aims to increase the share of renewable energy in the energy structure from 40% to 45% by 2030, double the installed solar photovoltaic capacity to more than 320GW by 2025 and close to 600GW by 2030. Meanwhile, the Indian market imported almost as many modules in the first quarter alone as it did throughout the entirety of 2021.

LONGi’s operating activities generated a net cash flow of 10,698 billion yuan, an increase of 1162.43% over the same period, as a result of the expansion of the market scale, the improvement in performance, and the rise in the settlement of notes payable. Meanwhile, the company’s asset-liability ratio stands at 57.91%, and its asset-liability ratio is always below 60%. LONGi’s ability to recover funds and repay debt bolsters the company’s capacity to finance production expansion and withstand cyclical risks. Since last year, the price of upstream raw materials has been rising continuously. Under the strain of upstream costs, LONGi has taken the initiative to lock long-term orders with strategic customers so as to guarantee the benefits and value for customers. The company has accelerated upgrading and intelligent manufacturing capacity, constantly improved production efficiency and intelligent manufacturing level, and reduced operating costs. In the H1 of 2022, the company’s comprehensive gross profit margin was 17.61%, and the weighted average return on equity was 12.64%.

Environmental, Social and Governance (ESG), as a framework system and business philosophy that comprehensively focuses on enterprise environment, society and governance performance, is regarded as a new path for human beings to achieve sustainable development. This business value concept conforms to the social development trend and is rapidly becoming an important criterion for determining whether an enterprise has sufficient social responsibility and capacity for sustainable development.

According to the report, LONGi has developed and reserved a variety of new high-efficiency cell and module technologies, seeking breakthroughs in various technologies such as n-type TOPCon, p-type TOPCon, n-type HJT and p-type HJT, and the company also creatively developed the HPBC (Hybrid Passivated Back Contact) cell, continue to promote the mass production and transformation of new high-efficiency cell and modules. On June 23, LONGi announced a new world record conversion efficiency of 26.5% for its silicon heterojunction (HJT) photovoltaic cells. The new record, validated in testing carried out by the Institute for Solar Energy Research (ISFH) in Hamelin, Germany, was achieved on M6 (274.4cm2) full-size monocrystalline silicon wafers, marking a new breakthrough in efficiency for large-size monocrystalline silicon photovoltaic cells.

In regards to the performance requirements of silicon wafers required by the new photovoltaic cell technology, the company has realized the compatible production of raw materials, equipment, auxiliary materials and other links, thereby ensuring sufficient technical reserves and mass production guarantee for the supply of silicon wafers for the new photovoltaic cell technology.

On July 25, 2022, LONGi’s Central R&D Institute officially kicked off operations at its global headquarters. LONGi Central R&D Institute is a world-class facility for the company to carry out research and development in the photovoltaic industry. The significance of the company’s R&D project lies in its ability to attract top-tier scientific research talent, advance the transformation and application of scientific research achievements, and accelerate the expansion of the green energy industry.

The company believes that LONGi Central R&D Institute will attract more than 4000 high-end scientific research talents, with more than 85% of the employees holding a master’s degree or a doctorate, and around 20 percent of the personnel being top researchers in the field of new energy.

As of H1 2022, LONGi has secured 1,808 authorized patents of various types, and invested 3.670 billion yuan in research and development, accounting for 7.28% of the operating revenue. During the reporting period, the impairment loss of fixed assets was 472 million yuan, maintaining the industry-leading quality of the company’s equipment and assets.

According to a recent report by the International Energy Agency (IEA), the global manufacturing capacity for solar photovoltaic panels has increasingly shifted from Europe, Japan and the United States over the last decade, and moved into China, with China taking the lead in investment and technology innovation.

This year, LONGi has brought the entire industry chain to Inner Mongolia for the first time. The 46GW monocrystalline silicon ingot and wafer project, 30GW monocrystalline high-efficiency photovoltaic cell project and 5GW photovoltaic module project all started their construction in the Zero-carbon Industrial Park in the Ordos.

China Photovoltaic Industry Association previously said that the global photovoltaic market development may start acceleration, and is expected to install 205-250GW this year, of which 85-100GW is expected to be installed in China. LONGi has set its global shipment target of monocrystalline silicon wafers around 90GW-100GW (including internal use) and shipment target of modules around 50GW-60GW (including internal use). The company plans to achieve operating revenue of more than 100 billion yuan in 2022.